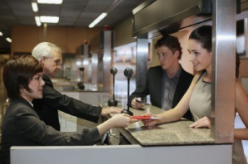 Before buying tickets, you should familiarize yourself with the rules of the selected fare. Return or exchange of tickets is carried out only if it is provided for by the indicated restrictions and rules. Cancellation of the order and refund is carried out only after the customer has addressed the relevant request.

Rules for returning tickets are determined by the airline carriers, so in each case it is necessary to additionally agree on the amount of the return with the airline.
The full cost of the ticket (with the exception of 1-3% commission of payment systems) can only be obtained if the order is canceled immediately after the electronic payment is made before it is discharged.

When returning tickets, the airline may be charged a fine, and the online agency may charge a service fee for issuing a refund.
If the return of the purchased air ticket is forced (due to the airline’s fault), then the fine and service charge are not charged. If the buyer returns the ticket for valid reasons, he must provide supporting documents, for example, a copy of the sickness certificate, after which the airline decides to charge a fine.

Recognized as forced returns are the fault of the airline if the flight is canceled; flight delay of more than 3 hours; illness of the passenger requiring hospitalization; death of a passenger or his close relative.
If the return is recognized as forced by the airline, the cost of the ticket is refunded to passengers, with the exception of the service charge and 1-3% of the payment systems.

Return of air tickets for other reasons is voluntary. In this case, the cost of the ticket is deducted from the penalty stipulated by the airline according to the rules of the selected fare, 1-3% of payment systems.
Ways to refund
In the letter on the return of the ticket you need to specify the desired method of receiving money. Funds can be returned to the office in cash, transferred to a bank account or bank card, as well as to a WebMoney wallet.

Refund to the account is made in the case when the air ticket was paid by bank transfer. The money is returned within 3-4 days of the organization or the person who paid the order.
In the letter on the return of the ticket you must specify the order number; full name or surname of the recipient of funds; checking account; Bank’s name; correspondent account and bik.

Return to the bank card

It is made in case of payment of the air ticket by credit card through the Internet. In order to make a refund, only the order number and the method of payment should be indicated in the application letter. The money is returned to the card with which the payment was made.
If the payment was made directly to the carrier, the refund will be made within 10-60 banking days from the date of receipt of the application for the return of the ticket.

If the ticket was paid via the Internet using electronic money, in the application letter, you must specify the order number and e-wallet, as well as the full name, patronymic and surname of the recipient.
Cash can be returned only to the person who placed the order within 4 working days.