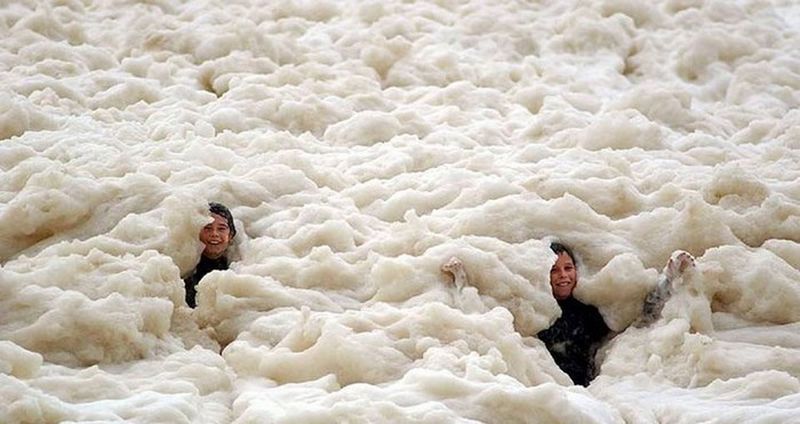 A natural phenomenon that is very rarely seen is sea foam or the Cappuccino Coast, the “coastal cappuccino”. It was observed in various parts of the world, mainly in the southern hemisphere, in Australia and Africa. The spectacle is very reminiscent of a huge bath, which turned the sea. Moreover, a bath with foam.
Therefore, local residents, comparing the phenomenon with a popular cappuccino — coffee with cream, gave it a second name — Cappuccino Coast.

Scientists believe that the phenomenon was the result of a huge mash of algae, sea tar and a variety of wastes that fell into seawater. A thick foam of them formed a stream of wind and carried to the shores, where the cappuccino of nature gradually melts, disappearing forever.

This phenomenon does not pose a danger to humans, although it is also not recommended to use water with such a foam content. Interestingly, nature has been cooking cappuccino around the world in several coastal cities, which is associated with a growing level of sea pollution.

In 2007, near Sydney, an ocean of so much foam was thrown onto the beach, that it flooded not only the entire beach, but also the buildings adjacent to it. The coast of Cappuccino coast became so fast that surfers waiting for a wave in a second found themselves in the very center of a typhoon of foam. Bubbles stuck to objects and people, hiding the beach in coffee crema.

No one was hurt, but the question of spending the weekend was decided in favor of the foamy shore. Scientists believe that pollution of the coast with chemicals, plant residues and biological waste has caused foam to cover more than 50 kilometers of the coast. A strong coastal sea currents led to a massive discharge of it on land. A similar phenomenon is observed off the coast of dirty streams and rivers. Increased foaming in ocean waters is a natural phenomenon. It occurs very rarely, and was last recorded more than thirty years ago.

Increased foaming in the ocean can be considered a natural phenomenon. However, this phenomenon is very rare. The last time on the ocean shore mass ejection was observed more than thirty years ago.
But in 2012, Cape Town in East Africa was fortunate enough to “try” a coastal cappuccino. It looked as if a huge amount of coffee with milk was poured into the ocean, mixing everything with a huge blender.