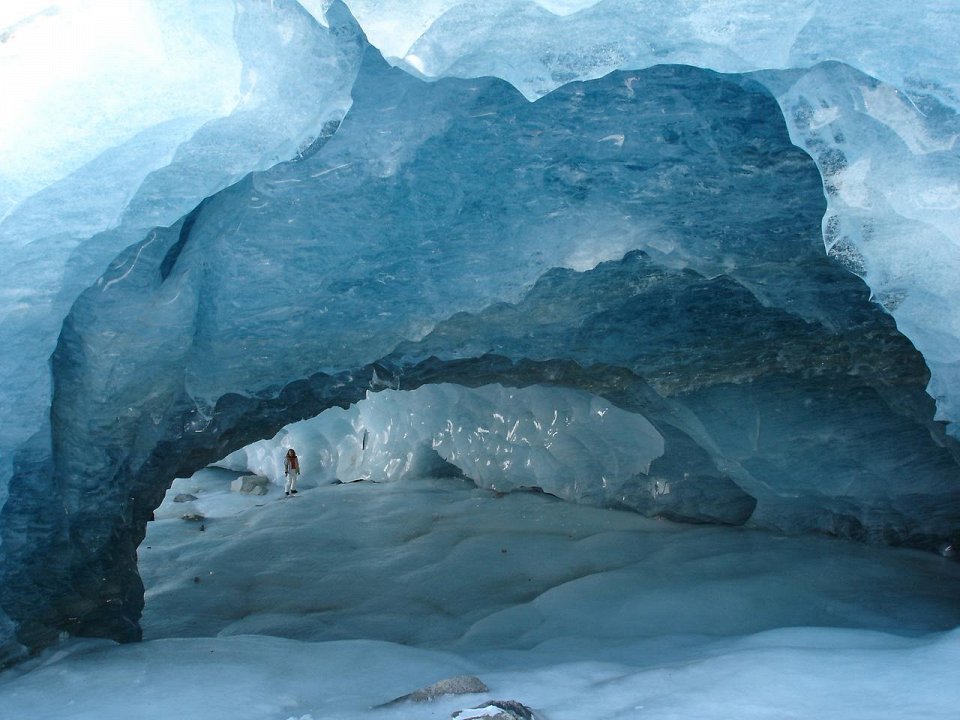 The world’s largest ice cave, Eisreisenwelt, is located in the Austrian Alps, just forty kilometers from Salzburg in the Hochkogel mountain.

The name «Eisraisenwelt» means «giant ice world.» It’s hard to argue with that. Inside the cave are frozen ice arches and gigantic walls, stalactites and stalagmites — altogether more than 30,000 cubic meters of ice.

Until 1879, not a single scientist was involved in Eisraisenwelt research. There was a firm belief that the cave is the door to hell. Only in 1912, the research of Alexander von Merck allowed to draw attention to the Abode of the Ice Giants. In 1920, Forshenhutta appeared, which became the first base.

Trails with stairs and railings were arranged for researchers. At the same time, the first masters appeared. Soon began to arrive tourists, attracted by the sudden popularity. Now the stairs and trails were replaced by a cable car, which allows to overcome a height of 1,5 km in just three minutes.

The Salzach River has become the creator of an amazing cave. About a hundred million years ago, he carved it in stone, washing out rocks. The cold wind still blows through the entrance, covering the walls with a crust of ice. Melting snow flows into the cave and freezes during the cloak. In the warm season, the wind blows from the depths of the cave, preventing the melting of ice formations.

Due to the different strength of the wind and the differential temperature, the ice acquires a different density, texture, shape and shades. Sometimes the masterpieces are just incredible.
The total duration of Eisraisenwelt exceeds forty kilometers. Only the first of them covers the ice. Everything here is cluttered with its vast strata and amazing formations. Further, except for the limestones there are no attractions.

The first of the halls received the name of the discoverer of the cave — Hall Posselt. The huge stalagmite in the middle is named Posselt Tower. Ashen cross on the wall means that the researcher did not go further.

This is followed by the Ice Quay with 125-meter arches, Chemir’s Castle and the Ice Organ or Frigga’s Veil. One of the halls is called Alexander von Merck Cathedral.

During World War I, the speleological scientist died. The urn with its ashes rests in one of their caves. The last attraction is the Ice Palace. The whole trip to the cave and return back take no more than 1 hour and 15 minutes.

Subzero temperature in the cave constantly. Going on a tour, be sure to wear studded shoes: there are places where there is simply nothing to catch on. Most of the route is equipped with railings and walkways, and they freeze through. Then the staff cut them off with ice axes again.

Of all the ice caves of the world, Eisreisenwelt is the most unusual and largest. Admire the scenery attracting travelers from all over the world.

For visits, the Convent of the Ice Giants is open annually from May 1 to October 26. The only thing that upsets tourists is the ban on all types of filming inside.