The Airbus A310 is a passenger, wide-body airliner designed for medium and long-haul flights. The salons of this aircraft come in two variations: three component, where the seats of the First class — 12 pieces, Business class — 35 pieces, and 138 seats Economy class. Or a two-component version of the cabin: Business class — 24 seats and 164 seats Economy class. The Airbus 310 is designed according to the Airbus A300 concept. In the process of modification, the aircraft received a shortened fuselage, a modernized chassis and an improved tail unit. 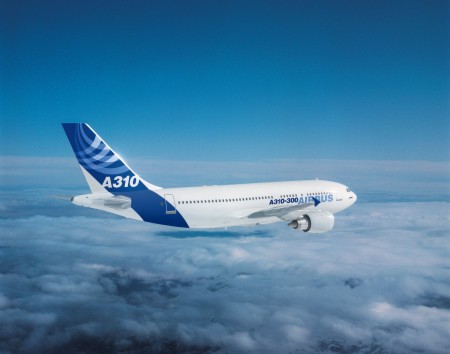 The first flight was made in 1982. And in 1983, the aircraft began operating in terms of commercial flights. Issued A310 until 1998. It was created 255 units of aircraft line Airbus A310 in various versions: A310-100. Serial base model. A310-200. Advanced design. Vertical tails began to be made of carbon fiber, installed winglets at the end of the wing and created composite brakes for the wheels. All these improvements have improved fuel efficiency.

A310-300. It differed from the base model by the presence of an additional fuel tank of 3,100 liters and the newest automated fuel transfer system. In addition, the model received EFIS digital avionics, an onboard system digital control system and an ECAM warning system in case of failure. The A310-200 aircraft, as well as the A310-300, were used by high-ranking officials from Canada, France and Thailand. In addition, the A310 line was widely adopted in the service of the Air Force from the European Union countries.

The first flight of the Airbus A310 took place in April 1982. Certification was completed by December. And by the New Year they had time to sell the first copy of the liner to Switzerland.