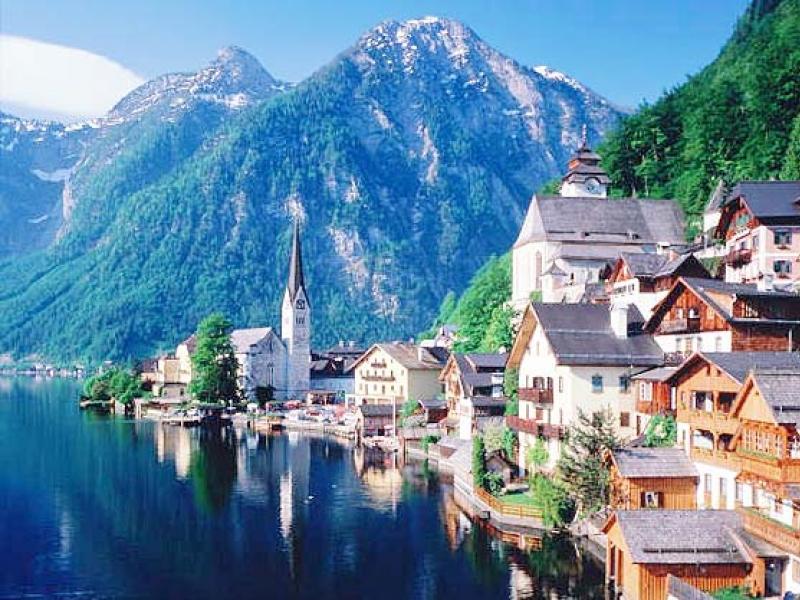 Austria is a mountainous country. The majestic Alps occupy more than 70% of its area, and 46% of the forest covers the mighty Danube River, the second in length, irrigates the land of Austria for 350 kilometers. The forests here are mixed: there is spruce, cedar pine and, of course, larch. But this is not all that this great country is rich with — steppes full of flowering heather, and endless pastures full of royal orchids and edelweiss will amaze any imagination.

The time difference with Moscow is 2 hours.

The territory of the country is equal to 83871 square kilometer.

The official language is German.

To enter the country, citizens of the CIS will need a visa. Foreign tourists traveling by car when crossing the border do not need to issue customs documents on the car.
In Austria, a driver’s license and driver’s license of almost all countries. Insurance is required without fail (green card).

Duty-free import of the necessary personal items during the trip in the amount of 430 euros per day. For those whose age does not exceed 15 years, the limit is 150 euros per day. Upon reaching the age of 17, you can import 250 grams of tobacco or 50 cigars or 200 cigarettes for personal consumption.
Allowed to import two liters of sparkling or ordinary wine or 3 liters of beer and an additional one liter of other alcoholic beverages. The import of medicines is allowed, but not more than 3 retail packages per person.

The capital of Austria, as well as its largest city — Vienna. Here in the cafe you can order the legendary cold black coffee with rum, and in the spacious halls of the Museum of History and Arts you can see the famous paintings of the geniuses of painting by Raphael, Rembrandt, Rubens, Giorgione and Titian. You can also visit the unique Sound Museum, which is located in the Archduke Charles Palace in the Old Town.

Vienna was once the illustrious capital of composers — Mozart and Haydn lived and worked music geniuses here. If you want to join the secrets of the life of the past — you can visit the only apartment that still exists today, Mozart, and in the suburbs of the capital — the house of Haydn. And now in Austria the sounds of music accompany everyone, painting life into lighter colors. At the mountain festival venues, in Linz on the stage of the Bruckner Concert Hall, where one of the best orchestras plays (musicians in national Austrian clothes), you can enjoy the great heritage of the brilliant composers of the past, the amazing music of Mozart, Haydn, Beethoven.

The winter residence of the Habsburgs — the Hofburg, too, can tell a lot to tourists. For example, the Sissy Museum (it would be better to call it Sissy, well this is not about that now). It was created by Professor Langenfass in honor of the illustrious empress, the Bavarian princess and the first beauty of Europe, Elizabeth, and was opened on the day of the 150th anniversary of her wedding with Franz Joseph I.

An hour from Vienna, not far from the Czech border, you can visit the famous “crazy” village of Herrnbaumgarten, Nonseum. In it are the most unusual and ridiculous as superfluous inventions of mankind: a portable hole, dentures for third teeth, covers for heels. By the way, this village is located at an altitude of 212 meters above sea level.

On the banks of the River Mur there is the ancient city of Graz, which houses a marvel of architecture — a construction in the form of a slightly ajar sea shell. This is the country’s largest land museum and its collection of historical weapons will conquer everyone, for it occupies six floors!

If you are a fan of winter sports, then Austria is the best choice for you. After all, it is here, for every taste and preference, you can find winter entertainment: skiing, skating, snowboarding, sleigh rides. In Austria, the city of Tyrol skiers, prepared a stunning surprise, built by the famous architect Zaha Hadid ski jump on Bergisel, which became a symbol of Innsbruck.

Between Bodensee and Arlberg, in the Bregenz Forest, small, cozy hotels will conquer you with their cedar saunas. You can also visit the «Carinthian Water Empire», which hits more than 60 healing springs.