Departure is made from Domodedovo and Sheremetyevo airports. Average flight time 16 h. 45 minutes. Arrival in Jakarta is carried out in airports: Soekarno Hatta. 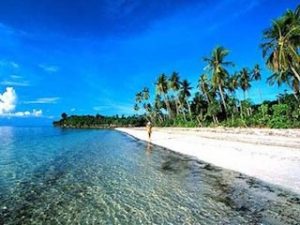 Indonesia is not just a country surrounded by the sea, but an entire scattering of islands that simply attract tourists with its picturesque nature and excellent conditions for relaxing on sandy beaches.

The amazing vegetation of the tropics hides many ancient temples and buildings, the exotic wildlife amazes with its diversity, and the Aboriginal tribes living on the islands have preserved traditions from the Stone Age and are not in a hurry in their development.

By contacting us, you will be able to combine outdoor activities with relaxing on the beaches, familiarize yourself with the culture of the locals and go on the most interesting excursions deep into the islands.

The most famous for tourists is the island of Java, which is famous for a large number of volcanoes, the delightful world of flora and fauna of the equatorial belt. There are a large number of ancient palaces and you can buy amazing samples of folk batik craftsmanship, precious metal items, etc.

The capital of Indonesia — Jakarta is also located on this island and is ready to offer tourists a fascinating journey into the history of the country and the island, which can be made by visiting the expositions of local museums: National History, Indonesian culture and others. Of the objects that are most interesting for tourists, the 17th century drawbridge called Chicken-Market Bridge, the Jine-Yuan temple whose construction dates back to the 17th century, the National Monument on Freedom Square, more than one hundred and thirty meters high, the Presidential Palace, the park under name small Indonesia or Taman Mini, etc.

A flight to Indonesia absolutely does not mean that you decide to rest on the island of Java, maybe your goal will be Bali, which is also well known to tourists, and the capital of the island Denpasar is a rather pleasant town with a measured and not chaotic lifestyle. There you can stroll along beautiful, quiet streets, visit local museums, such as the ethnographic or art center, and spend the rest of the time, as it should be, on the beach, basking in the sun or hiding from it in the shade. Most attracted the attention of tourists active volcano on Mount Gunung Agung and the whole complex of temples, located on the rocks, and even a list of caves, such mysterious and attractive.

You can go to rest on the islands of Sulawesi, Sumatra, Borneo, Flores and others — each island is unique and it always has something to offer tourists, except for the magnificent beaches and sea surf.