Approximate flight time to Prague from Moscow is 2 hours and 40 minutes. 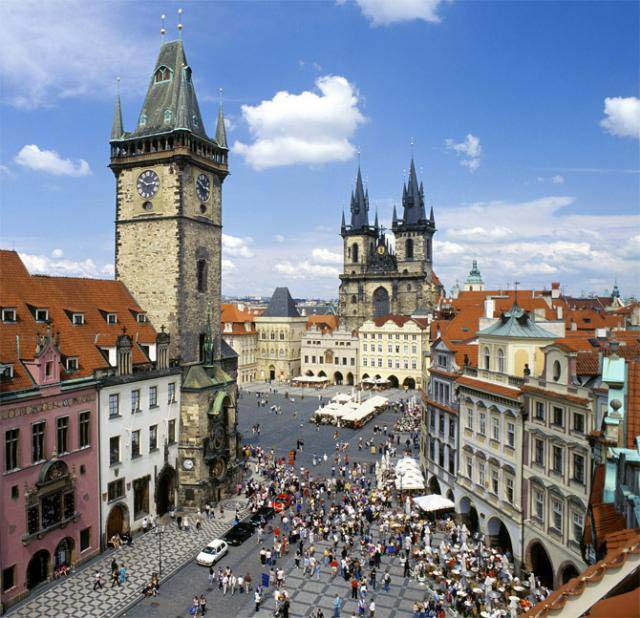 Prague is one of the most beautiful cities in Europe, the capital of the Czech Republic. The city stretches along the two banks of the Vltava River. The first mentions of the settlements of the Slavs in the territory of present-day Prague belong to the VI century AD.

Among the famous sights of Prague are eighteen stone bridges connecting the banks of the Vltava River. One of the most magnificent is the Charles Bridge, a work of the Middle Ages. A masterpiece of Gothic architecture — St. Vitus Cathedral, built more than 600 years. Interestingly, 5 blocks of Prague are included in the list of UNESCO World Heritage Sites.

The chemical, textile, clothing, printing and food industries are well-developed in the industrial sectors. This is not only a business and industrial center, Prague is also proud of its cultural heritage.

Most of the visitors tend to get only to the capital, Prague, unfairly bypassing the rest of the city of this amazing country. Of course, Prague deserves special attention. Here you can enjoy your special, unique chic and charm, which the sophisticated tourist will immediately feel. Prague is a precious storehouse of architectural buildings that have been preserved from far times. However, Prague is a modern city, where rich history and modernity are wonderfully intertwined. After enjoying this wonderful city, you should take a trip inland to see a lot of mysterious ancient castles and palaces, green mountains, quiet forests and lakes, small cozy towns, chat with smiling hospitable villagers. Czech Republic — a country of castles. So, not far from Prague, in Central Bohemia, you can see the masterpieces of castle buildings — these are the majestic palaces Konopi?t? and Karl?tejn. A small town called Kutno Gora and the village of Sedlek with a creepy crypt will easily take you to the Middle Ages. Later you can add cultural impressions with gastronomic, having a good rest in the wonderful place Melnik, which is famous for its art of winemaking. Here you can see how the turbulent river with the romantic name Vltava flows into the cold Elbe (“Labe” in Czech), forming a single, powerful stream.

Located in the center of the Old Town and is considered one of the most beautiful in Europe. In the Middle Ages, this area was the main market of the city. In its center there is a monument to Jan Hus, a national hero and reformer of the 14th century.
The square has an astronomical clock, the dial of which shows the phases of the Sun and the Moon, the calendar, the time until the sunset or sunrise. The amazing chime of the bells belonging to this watch is spread every hour throughout the whole area.

To see all the majestic beauty of the Old Town Square, to feel the spirit of Old Prague, for the first time it is better to go there when it is not crowded. 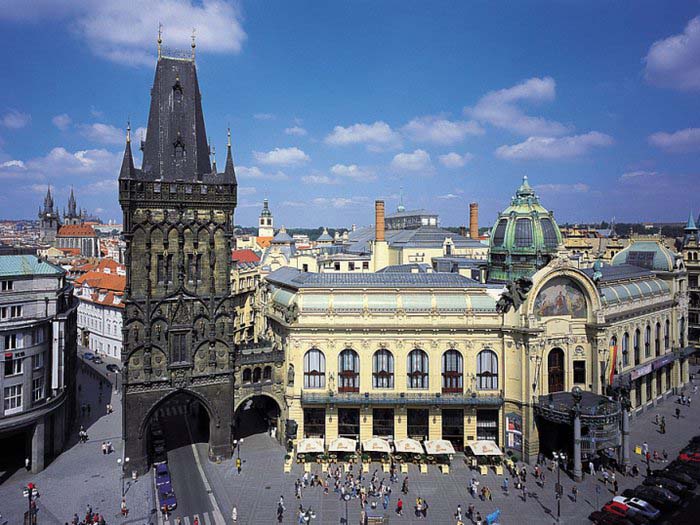 The Powder Tower is another attraction of the Old City. Today’s view of the tower acquired at the end of the XIX century. From its observation deck offer breathtaking views of the Prague Prague.

Not far from the Powder Tower stands the Municipal House. It was erected in the place where the palace of the Bohemian kings once stood. This house houses the Smetana Hall, which hosts the Prague Spring Festival every year.

Celetnaya Street, running from the Powder Tower to Prague Castle, was once part of the coronation of the Bohemian kings. Currently, this street is intended only for hiking. There are many restaurants with varied cuisine, a huge number of shops with souvenirs and famous Czech glass.

Church of Our Lady before Tyn

The most famous building built in the XIV century. And after the fire of the 17th century, baroque towers with a height of about 80 meters appeared on the Gothic site. The famous astronomer Tycho Brahe is buried in this temple.

Another attraction of the Old City. Previously, the complex belonged to the College of Charles University, now it houses the National Library. Clementinum covers an area of ??about 2 hectares.

The most famous building of the city, built in the 14th century. For centuries, starting from the 17th century, the bridge was decorated with statues, and today there are about 30 of them.

This quarter was named because of its location. It is located near Prague Castle, on the left bank of Vtlava. It collected a huge number of buildings in the Baroque style. Albrecht von Wallenstein Palace is considered the most interesting and famous.

This area, which is a small village, was annexed to Prague in 1884. Vysehrad is a popular place for romantic meetings, leisurely walks and picnics. In Vyshegradsky cemetery, many remarkable artists and social life of the Czech Republic (Karel ?apek, Mikol?? Ales, B. Smetana and others) are buried.

These are just a few of the sights that can be seen in Prague. Even the most experienced tourist will find something new and interesting for himself in this amazing city.