The Abakansky railway junction, located 4,200 kilometers from the Russian capital, is today one of the most important stations that make up the Krasnoyarsk Railway.

The founding date of the Moscow railway station is considered to be 1916, when the first postal and cargo trains began to carry out transportation on the territory of Khakassia. 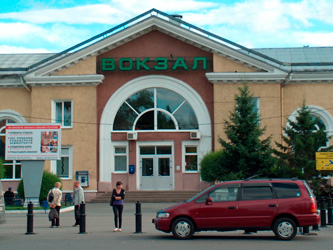 The founding date of the Moscow railway station is considered to be 1916, when the first postal and cargo trains began to carry out transportation on the territory of Khakassia.

In 1926, transport links were established by rail on the route Abakan — Moscow. In place of the old railway station building in 1959, a new railway complex was built, around which the city began to grow. It is for this reason, the city station is located in the heart of the village.

The central railway station in the capital of Khakassia has 2 platforms, the number of tracks is 6. The complex has an exit to Vokzalnaya street, its central location is very convenient for both residents of the city and its guests. In the two-kilometer radius from the station there are 6 modern hotels.

The renovated building has several waiting rooms, differing from each other in size and comfort level, a small playroom for children, information boards with the current train schedule, a snack bar, as well as cameras for storing large-sized baggage and hand luggage. Passengers can also use the services of the service center, as well as a room for mothers with children.

At the station 3 long-distance routes are formed, which connect the city of Abakan with Krasnoyarsk, Novokuznetsk, and Moscow. In the summer, the company sent out temporary formations from the settlement to Tomsk, Irkutsk, Bishkek and Adler. In the schedule of suburban traffic there are trains to Koshurnikovo and Biskamuzhu.
There are regular trains from Abakan, which follow in 73 directions, providing transport services for the delivery of passengers to numerous cities in Russia.